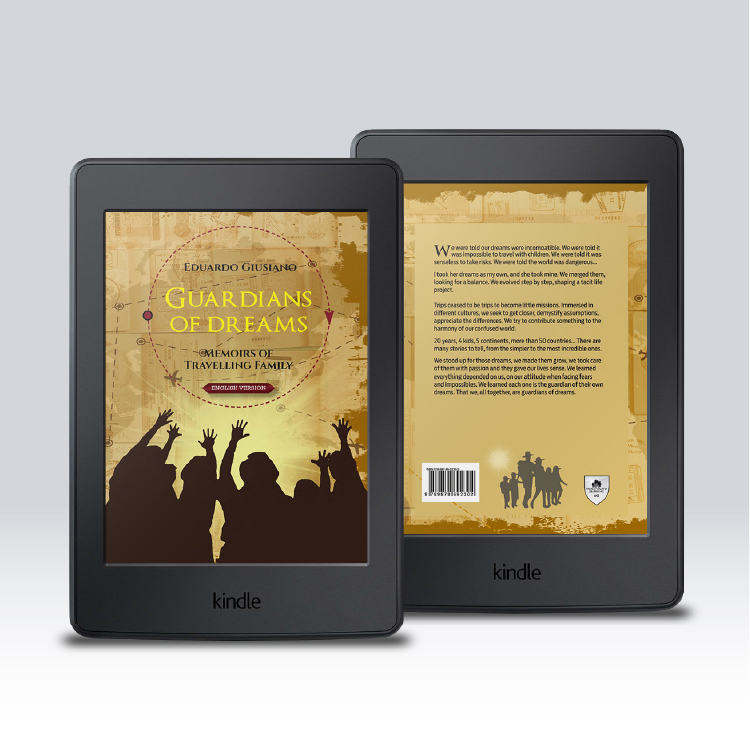 The digital version of Guardians of Dreams – Memoires of Traveling Family is available in color PDF format and in EPUB format for reading devices.

Guardians of Dreams is an adventure book through life and the world. It is not fiction, it concentrates more than 20 years of a particular story based on the communion of two apparently very dissimilar dreams: trips to countries of great diversity and a family with many children.

Each chapter includes a chronological framework of the family’s evolution, as well as the context of the trips with the simple narrative of a traveler telling his story. In what we call the Logbook of stories, with an explorer khaki background, the chronicles of some of the most relevant events of each journey are concentrated, as if they were independent stories, but in the context of the chapter.

The techniques, the “how” to achieve it and the philosophy are interspersed between the chapters along with reflections, experiences and learning. The evolution was not only technical, but spiritual: each game became a small mission, in the search to contribute our grain of sand to world harmony, to the appreciation of the differences that separate so much.

Beyond the trips, the emblematic places, the routes and the experiences, this book also tries to lead to personal reflection on the responsibility of each one regarding their dreams and shared dreams. It is, in a way, proof that the word impossible is relative.